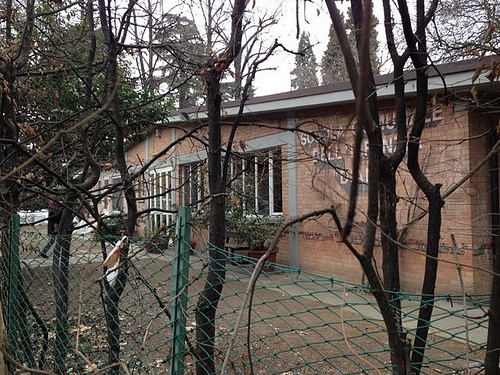 This morning I visited the  Diana preschool, the first of the municipal preschools that opened in 1970.  The school is situated amidst a loose line of shrubs in the city’s central park.  This was intentional; Malaguzzi wanted the school to be in the heart of the city, a symbolic representation of the centrality and importance of childhood.

I spent a good portion of the morning observing in a classroom of four-year-olds.  On entering the space, the feeling was warm and engaging. There was a lot going on in here, but it was controlled, busy without any sense of sensory chaos.

At the table near the entrance, eight children were at work with large pieces of clay. They were creating a dynamic “habitat” for a dinosaur in the center of the table, who was under a tree branch that made a sort of arched barrier over him. There were wooden tracks and various other wood pieces around the table, and many of the children were building clay arches over the tracks.

Meanwhile, in the block area, two boys were busy at work with wood blocks, rocks, disks of wood made from various sized branches, and a range of dinosaurs and various other animals.  At first it wasn’t clear to me where their building was headed, but then they brought out the giant predators--an alligator and a t-rex--and carefully constructed enclosures to keep them contained.  At that point I thought they were only penning-in predators but later noticed that a giraffe was cordoned off in a corner. It was a zoo!  As one boy built a series of rock pens for various animals, the other boy started in on an elaborate entrance way including an arched entry gate.

At the paper table, five students had drawn on black construction paper with white pencils and were adding long, thin strips of white paper and white wire for dimensionality. They were cutting, bending, gluing. There were ribbed arches across the pages, and confetti sized pieces emphasizing drawn designs.

At the light table, two students were building a tiered structure using plexiglass sheets and clear plastic cups of various sizes. This work later extended from the light station, via student-made bridges using chairs and plexiglass sheets, to the neighboring clay table. Children were climbing over and under these bridges. 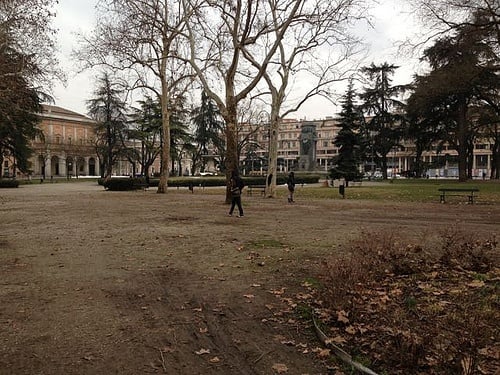 In the classroom atelier (each room at Diana School has its own small atelier in addition to the school’s shared atelier) students were painting a beautiful red flower. There was a camera on the flower; students could choose the angle they wanted to paint and then use the image from a large monitor to actually create their bright red and green paintings.

Back at the zoo, there was a conflict over a dino one boy had recently penned in with rocks. The boy building the entrance took that dino for his work and when the first boy took it back he disrupted the entrance structure.  Tempers flared and there were some tears.  The teacher came over and helped them negotiate the issue.  While I couldn’t understand the exact words, the dialogue seemed to follow a familiar course:

Teacher:  Why is Stefan upset?
Georgio:  I took the dinosaur back. He took it from me.  I had it first. (hands waving)
Stefan:  He broke my building!  Look!  (sniffles and tears)
Teacher:  Did you break the building?
Georgio:  Well, yes, but he took my dinosaur.
Teacher:  Stefan, did you take the dinosaur?
Stefan:  Yes, but I needed it.
Teacher:  Was Georgio using it?
Stefan:  Yes, but I needed it here.  See?  It goes here.
Georgio:  It goes here where I put it.
Teacher:  Georgio, now that you have the dino back, can you help Stefan here with his entrance? It was damaged when you took back the dinosaur.
Georgio:  Ugh!  (hands wave) Ok, Stefan.  Come on, I’ll help you.
Stefan:  Ok.

Once the two boys started working together on the entrance, their play became more collaborative than parallel. They stayed busily at work for the remainder of the morning.

That was what really struck me; these children had decided where they would spend the majority of their morning during the class Morning Meeting, and that’s exactly what they did. Their work was intentional, focused, and of depth. When they finished and moved to another area, they didn’t disrupt the work of others but rather observed and engaged.

And then there was the teacher, Evelina. This woman was moving nonstop. She was constantly engaging the children, directing them to the work and ideas of their peers, taking pictures, documenting thinking on her clipboard. She was like a bee, buzzing about but with gentleness, calm, and respect. She pointed out what was beautiful, what was interesting, what was working and what might go farther.

I had questions about the arches that seemed to infuse in the work of the day, so I tried to ask Evelina about them in gestures and what I can only imagine was loud and very slow English. She responded with such passion! She talked to me at length about what was happening at the clay table. Unfortunately, she did so in Italian.

I hate to think of what I missed, but her energy was infectious. Soon, a woman who spoke English and Italian joined us and started translating. She pointed out the connections between the tables and explained that the clay table habitat was an extension of a conversation they had the day before about a video game and the students at this table were creating a complex maze to get the dinosaur or (or keep him in, this detail was lost in translation). The study of arches was a natural extension that had started with this work, and she was observing the many ways the children were engaging this idea through physical structures large and small.

That was the first thirty minutes of my visit to the Diana School and I am so thankful to the students and teachers, in particular Evelina, for making time and space for our visit today.