Failing Grades: How to Motivate Students to Learn Without Keeping Score

Students need to learn by doing -- through problem-solving, project-based learning and being creative.  Parents, myself included, need to let go of a system we grew up with and recognize how we experienced school will not prepare students for now, or much less 2040, when two thirds of the jobs that will exist then do not even exist today.

We must replace our traditional, antiquated grading system in the United States. Its inadequacies have been laid bare by the COVID-19 pandemic.

Most colleges and universities moved to some form of pass/fail grading for this semester in light of the shift to online learning and assessment issues.  Many primary and secondary schools followed their lead.  When announcing that we would utilize distance learning for the rest of the school year, Governor Pritzker of Illinois said this about grades: “Grades should deliver feedback and not be used as a tool for compliance.”  But do we need grades at all?  Even in normal times?

We don’t.  If you think about it, sitting in desks and rows, filling students with information, is an educational model of compliance, to use Pritzker’s word.  We have followed that same model since the 1840s.  And now, for months in the middle of the pandemic COVID-19 crisis, that neatly organized format of delivering education has come to a screeching halt.  It should not surprise us that a two-hundred year old factory model cannot serve us in modern times, especially now as distance learning is put into place for children all over the world.

Our country’s antiquated letter grading system, based only on scores and percentages, assumes you must stay within the lines, be taught the one right way to solve a problem, and quickly repeat that way back in a test setting.  That system pays little respect to creativity, diversity of thinking, and cultural background.  We need to wake up.  Life is not a multiple choice test.

Some of us have had the opportunity to sit in a lecture with an accomplished, published professor who struggles to engage their students.  This perfectly illustrates limitations of traditional grading -- on paper, someone may score highly in a subject, but that says little of their ability to convey knowledge to others.  Traditional letter grades are a one-dimensional illustration of knowledge at a given point in time.

Renowned author and advocate Alfie Kohn has been preaching for years about the failings of letter grades.  As Kohn emphasizes, research shows us that without a doubt, letter grades do three things: (1) they diminish student interest; (2) they incentivize students to take the easiest road; and (3) they lead to the student mindset becoming shallow with questions like ‘why do I need to know this, and will this be on the test?’

If grades are a crutch for teachers, how do we instill that Iggy Pop ‘Lust for Life’ in our students?  Teachers are passionate and skilled, and they entered the field because they love teaching and learning.  Why force teachers and students to do what we know, from nearly two centuries of experience, will do the exact opposite of encouraging a love of learning?  Letter Grades Deserve an F. We now know: a Love of Learning is More Predictive than Grades when it comes to long term success.

Inside of the education crisis that confronts us now, there is an opportunity.  We must seize it quickly to forge a better way before it is too late and it floats away from our grasp.  College admissions now recognize talent beyond grades and scores, and our K-12 schools need to catch up, fast. 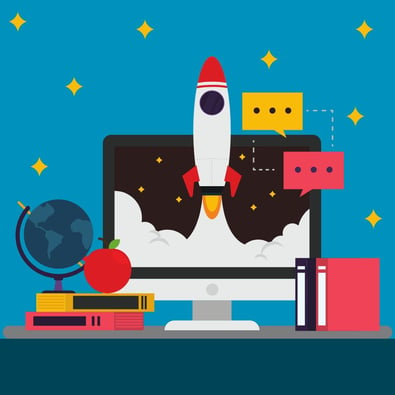 Students need to learn by doing -- through problem-solving, project-based learning and being creative.  Parents, myself included, need to let go of a system we grew up with and recognize how we experienced school will not prepare students for now, or much less 2040, when two thirds of the jobs that will exist then do not even exist today. We don’t need a faster horse, as Henry Ford told us when he brought the Model-T to life.  We need a new rocket ship for the Fourth Industrial Revolution.  We need a better way to measure student progress while supporting a love of learning.

Our traditional, familiar school conventions reward docile compliance, not creativity.  Einstein reminds us about insanity, defined as doing the same thing repeatedly but expecting a different result.  Continuing to educate K-12 students as if we’re preparing them all to be factory workers will not produce the creative output we so desperately need!

Knowledge and passion are not well reflected by traditional letter grades.  But they can be instead with standards-based grading.  My own children at Bennett Day School have standards and goals to reach, but they reflect my children’s competencies.  Competency-based grading measures if students are ‘approaching’, ‘at’, or ‘beyond’ proficiency according to these standards, plus feedback is provided by teachers against those standards.  As students move into middle and high school, you can simply convert such standards to an A, B, or C, but letters and percentages alone are empty vessels.

Studies repeatedly show that students retain and apply upwards of three-quarters of what they learn this way, compared to far lower retention with a purely rote ‘academic’ approach.  My fourth-grader still talks about building a savannah, grassland, and desert project from kindergarten, six years ago.  In layman’s terms, learning by doing, in early childhood and through high school, is the best way to learn and get knowledge to stick.  That doesn’t suddenly change when a child enters third grade.

But wait, what about college!?!  There is an educational machine, and industry for that matter, that was once upon a time addicted to grade point averages and standardized test scores via the Common Application that is still accepted by close to 900 schools.  Well, the system woke up and in just the past five years, over 150 colleges and universities started accepting the Coalition Application, including every Ivy League school like The University of Pennsylvania, Harvard University, Yale University, and Princeton University as well as Northwestern University, The University of Chicago, Stanford University, California Institute of Technology, The Ohio State University, The Pennsylvania State University, and more. Recently, The New York Times reported the University of California voted to phase out the SAT and ACT as requirements to apply to its system of 10 schools, which include some of the nation’s most popular campuses.  This is part of a movement started by the Coalition.

The Coalition was created by the Ivy League and Stanford initially, and it essentially says that grades and test scores are not enough to understand a college applicant. They are no more than a few numbers on a piece of paper.  Instead of just grades, students maintain a digital locker with the Coalition where they can upload projects, essays, art, video, extracurricular activities, and other examples of their work and pursuits.  This digital portfolio provides college admission officers an opportunity to view student progress and developing interests over years through tangible projects.

How refreshing: instead of being filtered from a stack of 40,000 applications to 8,000 just based on grades and test scores, the college now wants you to show them how you love to learn, what your purpose might be, and where your passion intersects with your skills to serve a need in the world.

The traditional letter grade system needs to go away.  Students retain and apply at best one-quarter of what they learn that way; they forget and move on to the next thing, worried about what is on next week’s test.  There are programs and videos being shared for free with the world right now (like Bennett Live, for example, from Bennett Labs as the R&D arm of our K-12 school) that instead bring joy and a love of learning into our living rooms with creative play, STEM, and project-based learning.

Teachers recognize the damage that the traditional letter grading system is having, especially now.  “The Chicago Teachers Union has decried Chicago Public Schools’ decision that students will receive third-quarter grades, despite the coronavirus disrupting education”, reported the Chicago Tribune.  By the time they reach high school, students are typically motivated to complete schoolwork mainly by threat of tests and grades, and now many are flailing without those external motivators.  Teachers know the most important thing is that the students learn, but it’s late in the game for them to engage students without the carrot or stick of testing and grades to which these students have become accustomed.

Starting this fall, we need to move to a standards-based grading system to cultivate a love of learning and not an obsession with letter grades or test scores.  So, when we are in distance learning next time, and we must plan that there will be a next time, we can hit the virtual ground running.  Not only will this approach prepare teachers and families, it will also ensure our children are prepared for an unknown future.  Students in school now will retire around 2070.  We must be forward-thinking, now in 2020.

If you agree, first write letters to your teachers, and parents, and say ‘thank you’ or how grateful you are to each other for the tireless efforts now and to come.  But then, write to your school principal, your school board, your state board of education, the Department of Education, and tell them enough is enough.  We want competence, not compliance.  We want our children to #LoveToLearn.  And the system has to change, starting this fall.