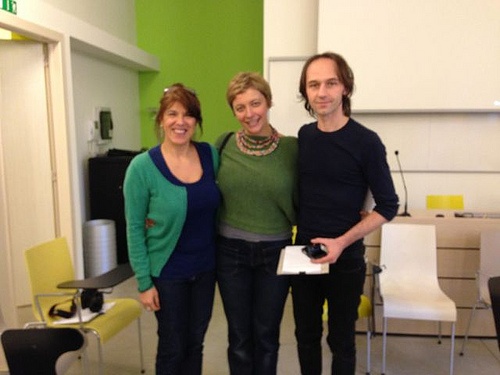 On Friday, we got to get our figurative hands dirty in one of ten ateliers that were arranged for us.  I chose the Digital Atelier in large part because I am increasingly interested in the effective technology integration in the learning context. Seamless technology integration: that’s what I was hoping to explore.

Well, I couldn’t have asked for more.  We were in the City Atelier in the Malaguzzi International Centre.  Our teachers were three atelieristas including Simona from the Diana School, so I knew it was going to be great.  While this blog cannot do justice to what was a remarkable process, I’ll do my best. 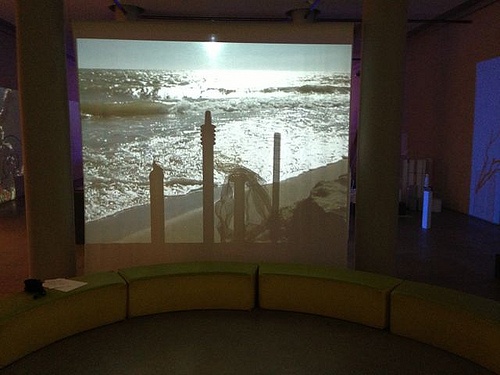 In the first area, a screen displayed video of ocean waves, eclipsed by towers of various heights and opaqueness which stood in front of the screen. These towers cast shadows, creating the impression that the towers were filling and emptying with the crashing of the waves.

The second area had a digital palette that reacted to a stylus and was projected onto a screen.  There was also a projected image of an underwater scene on the same screens.

The third area was all about magical shadow play: the supersized result of tiny superhero figurines placed in front of a floor-mounted webcam and projected onto the wall.. As time went on, people asked questions about shadow, angle, refraction, and reflection this set-up created.

The final--and, to me, most intriguing--area included another webcam on a white box on the floor. The images it captured were projected on both a computer (on the floor) and on a tv screen that was on a table four feet up.

At this point, I confess, I couldn’t keep merely observing.  This area was calling out to me.  I HAD to touch that camera.  I had to move it around and change the angle and shift the perspective.

When I discovered that by shifting the angle and including the mirror one could see three or four of the images of the TV in the screen, I started looking around for someone to show it to. “Come and see!” I wanted to shout.  Marco, one of the atelieristas, caught my eye and came over.  He asked me if I understood what was happening with the image on the tv screen.  I said I wasn’t sure but that I was sort of captivated.  He left me to my exploration.

Soon I was joined by another woman at the table, and together we started playing with the depth perspective, matching up elements in the foreground with those in the background.  We added some textured cones to the lens of the camera.  The delight of impact and effect was strong. “Look what we’re doing,” we seemed to be transmitting to one another. “Look what we’re creating!”

When Marco came back over he asked me, “Did you figure it out?  About the TV?”  He told me to bring the camera close to the tv screen to see if that changed my understanding.  Susana, a woman from the Bay Area, was sitting on the floor now and we started in again, taking turns moving the camera through the landscape of the table and adding color, textures, and watching the screen.

More people came over and the atelierista started watching us.  She taught me how to capture the video so we could watch what we had created.  “Document your narrative,” she said.  It was right then that we collectively realized we were telling a story. We started creating a narrative with intentionality, reminding each other of images and effects we had responded to, happy accidents that had a visual impact.

We asked each other questions and prompted one another to go a step further.  Six adults sitting on the floor with one tiny webcam and a table full of shapes and materials and a vision for a story.

As soon as we had finished filming “The Journey of the Eyeball/Oculus Supremus/The Birth of the Eyeball,” we just had to watch it. As we watched, without choosing to do so, we started narrating the story, and it took on this whole other life.  I have to tell you, even as I write this now, I am smiling.  We laughed in burst of pure and simple joy.  The experience was an expression of joy.

I had only known these folks for two hours and worked with them for forty five minutes, but as we wrapped up the morning, I knew like I shared something deeply personal and deeply moving with them.  What is that feeling...that feeling of “come and look, come share in this with me?”  That delight. It calls up something so...tangible. It is the child’s pure joy in discovery, and sharing in the discovery.

That’s what we’re doing at Bennett Day School, as we move forward in our
evolution. Creating contexts for joyful discovery and collaboration.