What We Learned at Namaste Charter School

In early May, the Bennett Day School founding team participated in  Namaste Charter School’s Learning the Namaste Way: Educators Starting a New School workshop.  We learned about Namaste’s  core values and how they infuse their classrooms, hallways, and school culture with these values and resultant goals.

Shuchi and I attended a breakout session on parent involvement where we took away some wonderful ideas about how to create strong connections between families and the school community.  We heard from teachers about how they integrate body movement to enhance learning, self-regulation, and engagement.  We were able to observe the school’s carefully orchestrated dismissal procedure; within fourteen minutes the entire school, kindergarten through eighth grade were safely dismissed and on their way home or to after school activities.

Among the many wonderful things we saw and learned throughout the workshop was the time we spent with a second-grade student, "Mick."  Mick joined us for lunch on the second day of the workshop.  After we had a chance to introduce ourselves and learn a little bit about him, I told Mick about Bennett Day School and asked him for his thoughts on what would be the most important thing for us to have in a new school.

Mick’s thoughts, in the order below:

What resonated for me in listening to Mick’s thoughts about what we need in our new school is the immediacy. He’s aware of his space and how he and others use that space.  He considers not just his own needs, but the needs of others--both classmates and teachers.

I have a sense of what is important to Mick and what is important in his daily experience.  In a sense, he is describing what we understand via the Reggio Emilia approach, as his dialogue with his classroom space.  His understanding of who lives in the space is evidenced in his awareness of those who might need a place to sit other than their desk, accessible technology for more than one use, workspaces that allow for interactions in different ways.  What more would we have learned had we accompanied Mick to his classroom, observed those spaces, and his interactions with them and his cohabitants of the space?

In fact, Mick took us to the playground instead, which was located off of school property about 100 meters from the school’s adjacent pavement playspace. (The evolution of this play space is a wonderful story about community partnerships; a photo record of the construction of the space can be found here.)  Then, released from host duty, he went about running, climbing, swinging and jumping, squeezing 30 minutes of recess into 7 minutes. 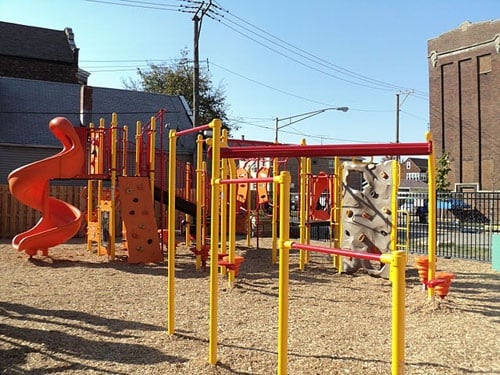 My conversation with Mick has stayed with me.  As we go about the construction and development of our school space, I have in mind both the global space and the immediate, intimate space.  School should be a balance of the two, and should reflect the core values of the school and the needs of its inhabitants.  We may well enlist Mick’s help again in the process!